To make up for the rather non-trivial amount of money it cost to build my x0xb0x, I decided to make another and sell it on eBay. I've been working on it since January (often while I should have been studying) but finally got it done after about 2 months of work. This is the result: 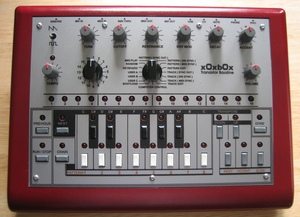 The primary differences between this x0x and the "stock" ladyada edition are mostly aesthetic. I chose to paint the case a darker shade of red, which turned out better than expected with the silver vinyl overlay. The overlay itself is sweet, but the alignment of the holes left much to be desired. I had to trim all of the LED holes with a knife after applying the overlay so the vinyl didn't end up sticking to the LEDs. That alone took several episodes of Bullshit to fully accomplish. The end result is reasonable as long as you don't look too closely. 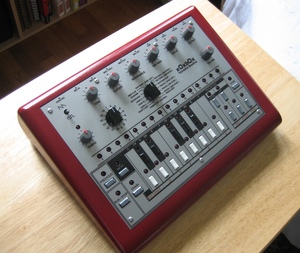 The knobs are the same as those on ladyada's parts list, but grey instead of black, and with a red pointer instead of white. If I had it to do over, I would have gotten black knobs with a white pointer. The grey doesn't really stand out enough and the red is actually more of a pink.

On the inside, I used individual wires instead of ribbon cable for the jumpers. This might have worked better with a smaller gauge wire. (I should have used 24 or 26, but 22 is all I have on hand right now.) Also, I used connectors instead of soldering the wires straight to the board. This ended up being a life-saver but introduced a few problems as well. For starters, the connectors are hideously expensive (about $25 for the whole lot, I think). Also, the 12-pin row on the mainboard ends up standing too tall and hits the bottom of the case when assembled.

Had no problems at all during the construction of this x0x and only found one silly but glaring issue the day before I shipped it to the buyer: The MIDI input and outputs weren't working at all. After an hour or so of troubleshooting with the oscilloscope, I finally figured out that I had soldered in six resistors of entirely the wrong value. Replaced them and it worked like a champ!

I'm a little sad now that it's gone, but building the second one was every bit as fun as the first.

Edit from THE FUTURE (2017): For the last few years, I have wished that I had never sold this one. Out of the three I built, it was the one that sounded the best.