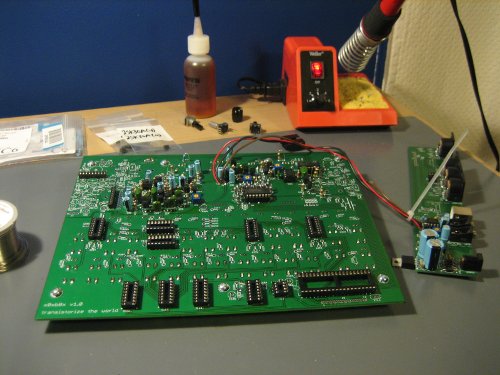 Here the power supply is done (the components on the smaller PCB to the right) as well as the VCO and VCA sections of the mainboard. And also a few IC sockets are in because I got bored one night and wanted to solder but didn't have all the parts yet.

Here's a photo of the finished product: 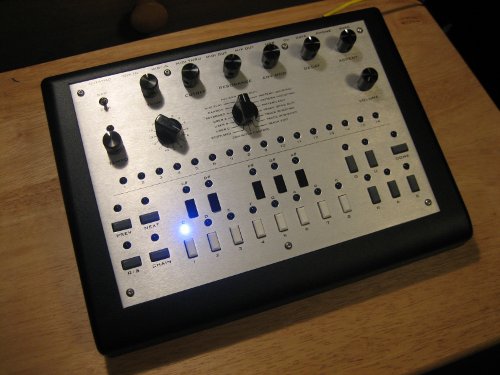 It simply sounds marvelous and is a joy to tinker with. I used diffused blue LEDs (which are actually hard to get a hold of cheaply) and metal knobs. The knobs ended up being the wrong size though, so they sort of wobble a little when you turn them. (The center of the pot is not the same as the center of the knob.)

I also happened across a picture of the oscilloscope I bought on eBay. Four channels, 100MHz, all awesome. It's the exact same model that I used in the Air Force to repair autopilot systems so I'm already familiar with its operation. Usually, buying something like an oscilloscope on eBay is extremely risky. An oscilloscope is a precision instrument with a million different things that can go wrong and quite a few bits inside that have to be calibrated every so often. On top of that, most of the test equipment for sale on eBay comes from auctions a.k.a., refuse.

I got lucky, though: $300 (free shipping) and there's not a single thing wrong with it. I like gambles that work out in my favor. 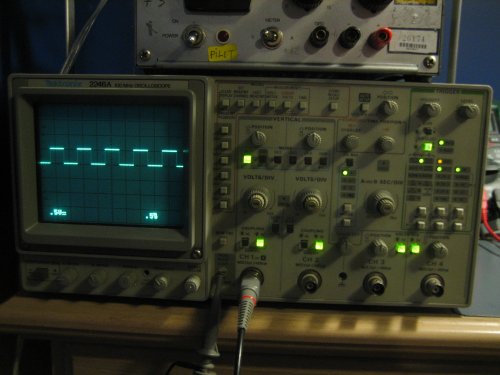