It was a dark and stormy night. My eyes were glued to the screen as I watched the Ansible playbook make its way through the myriad configuration changes across dozens of production hosts. Of course all of this had been tested in staging but if you work in technology, you have more than a passing acquaintance with Old Man Murphy and his insipid law. This is why my knuckles had turned white, poised over the Ctrl and C keys waiting to abort the play in a hurry if I really had to... and if there was enough time.

And then, inevitably, the moment I feared most had arrived. There was red. Lots and lots of red splattered across the display, illuminated by the display's backlight like some grotesque horror show. The scrolling came to a dramatic halt while my breathing did the same. I scanned the errors, realized what a fool I had been all this time (for at least the 12th time that day), corrected a typo, and ran the play again. Successfully, no thanks to that Murphy bastard.

The problem was caused by the fact that most changes to our Ansible playbooks tend to span multiple files because we follow the recommended role-based directory structure. Which means having multiple files open simultaneously and switching between them as changes are made. This, as demonstrated by the not entirely fictional account above, makes the whole process prone to error. It's growing increasingly rare these days that I don't work on a project involving multiple files and clearly my workflow is failing me.

I wouldn't call myself a vim fanboy. It's just that vim is what I use. It's on virtually every host I'm likely to touch and it speeds up the process of editing code and config files so tremendously that I would be lost without it. The main problem with vim is that everything beyond basic text editing is pretty clumsy. Everything else that's handy to have in a ~~text~~ code editor has a learning curve, or is clumsy or annoying to use, or both. That includes many of the more full-feature extensions, and the graphical variants of vim.

For projects involving multiple files, lately I've been muddling through with some combination of terminal tabs, GNU Screen, and vim's "tabs." This works a little better than one would expect but it's still easy to get temorarily lost when my brain is busy chugging away at a more important problem.

And then it occurs to me that I've been trying to cobble together my own IDE. Previous to this revelation I have never used--or thought I needed--an IDE. I know that there are oodles of IDEs on Linux but my brief exposure to them in the past informed me that they generally take a long time just to load, take even longer to set up properly, and just come with way, way more stuff than I'll ever use. Oh, and I can't stand clutter. All I really want out of an IDE is this:

Everything else lies somewhere on the contiuum between fluff and brain-damaged anti-features. Gvim doesn't quite fit the bill due to lack of a simple file manager that can stay put and its tabs that aren't really tabs. Plus if you have to exit vim (or shut down your computer), the whole arrangement is lost. Most other IDEs and editors get shot down either by not supporting vim-style editing or not being open source.

Now, I wouldn't call myself a luddite but a lot of newfangled stuff doesn't impress me. In many cases, a surprising amount of stuff that hits the front pages of Hacker News and subreddits is just some old idea repackaged with gushing praise for itself and support for emoji. So when Atom made a big splash my first thought was, "great, they're reinventing the text editor but this time in Javascript." I remember running it once just to see what all the hype was about but recall it being slow and unimpressive.

Well fast-forward a few years and Javascript is practically a first-class citizen on the desktop today. It has a mature community, fast interpreters, and lots of libraries. Some of my co-workers are using these newfangled Javascript-based editors so I thought I would give them a whirl. Atom started the movement but saw such success that it was quickly followed by several work-alikes, also written in Javascript. Probably the most well-known contenders would be Brackets and Visual Studio Code.

It started out purely as idle curiosity, I swear. For one, I was amazed that Microsoft had an open-source code editor, hosted on GitHub no less, rather than just trying to bundle it with with their other dev tools. When I saw that they offered Linux packages prominently on their Download screen, I was positively intrigued. I just had to install it into a VM and give it a spin, if for no other reason than to grin at the ensuing train wreck and shake my head while making clucking sounds.

This is (approximately) what greeted me: 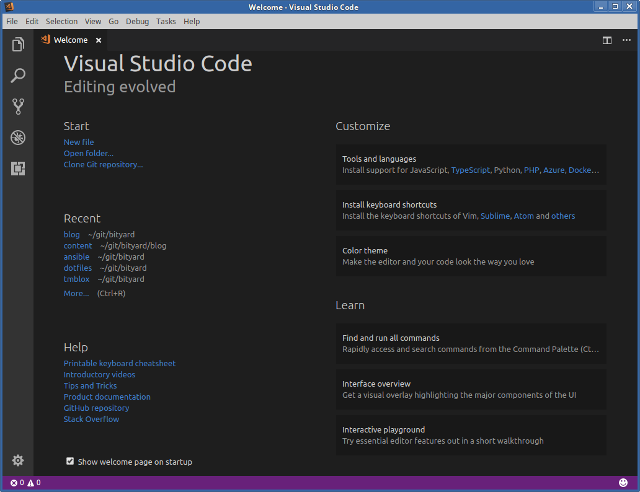 The first thing that I wondered was whether this thing can do vim well enough to hold at bay my chair-throwing tendencies when a tool doesn't work the way I want. I installed the Vim extension and gave it a test run. To my surprise, everything that I used on a routine basis worked fine. It looked like this was off to a promising start.

When I first started using VSC I didn't really know what I was doing so I opened my home directory as a folder. This turned out to be a mistake. For one, this causes VSC to spawn a process that crawls the whole folder in order to index the text. My home directory is relatively huge due to the nature of my work and this positively hammered the disk as well as ate up a whole CPU core. This actually caused me to write-off VSC as an ill-performing hunk of garbage for longer than I care to admit. Ever since I figured out that opening a folder dedicated to a single project is the right way to do it, things have been much smoother.

It turns out that VSC is actually rather well documented, so there's no point in me rehashing all of its features and whatnot here. So I'll just mention a few of the things that tick my boxes:

Integrated vim. Basically, all of the important things I routinely do in vim work in VSC.

Integrated file manager. It works pretty much exactly as I would expect with no surprises. To spruce it up just a bit, I also installed the vscode-icons extension.

Tabs. Tabs works as you'd expect. When you have the vim extension installed, you can even switch tabs with gt, although that stops working when you land on a non-vim tab.

Performance and stability. It opens instantly and is always quick to respond when typing. I haven't had it crash on me yet, that I can recall. Good enough for me.

Integrated terminal. I don't have a problem using an external terminal but the built-in one is nice to have.

Ubuntu/Linux friendly. The VSC package can be installed on Ubuntu where it will be automatically updated alongside the usual apt update && apt dist-upgrade routine.

A vibrant extension community. It's surprising how many extensions there are. I personally only use a handful of them.

Saves your work. If you close VSC and come back to it, it pops right back up where you were, with all your windows, tabs, and changes intact. Cool.

I've been using VSC for a while now and it has really grown on me. I really like how it gets out of the way and lets me get my work done. However, there are just a few things that worrry me or that I think could be improved:

Minimap enabled by default. The minimap is this icon-like view of the whole file in one vertical bar. It's too small to read any of the text but it shows sort of a vidual outline of the file. This is pretty worthless to me since it takes up quite a lot of real estate relative to the value it provides. Also, I believe that if you're working on a file that's becoming too big to easily navigate, that's a good sign that the file needs to be broken up anyway.

Non-unix newline handling. I filed a bug about this but so far, the devs don't seem to think its much of a problem. Basically, this is a holdover from the editos's Windows roots. On Unix, all lines in a file end in a newline, including the last line. Vim and all other Unixy text editors automatically put a newline on the end of a file but don't show it to you. There is a setting to work around this (see the bug), however it still shows an empty line at the bottom of the editor and that annoys me.

Integrated terminal as a separate pane. The integrated terminal can only live at the bottom of the window. You can't open one as a tab next to your other editor tabs, which I would prefer. And while can you have multiple terminals going at the same time, you have to switch between them via a drop-down. Not tabs, unfortunately.

Feature creep. VSC already does an amazing amount of things, but (and this is crucial) they mostly stay out of your way when you don't need or want them. This is in stark contrast to most IDEs that try to shove all the features into your face to show you how awesome they are. I worry that if the VSC devs keep trying to add more and more features that the code base will become bloated, slow, and hard to maintain if they don't draw a line in the sand somewhere.

Nagging. VSC nags you when you're not using the latest version. This drives me a little crazy. Not so crazy that I've looked up the setting to disable it, but still. 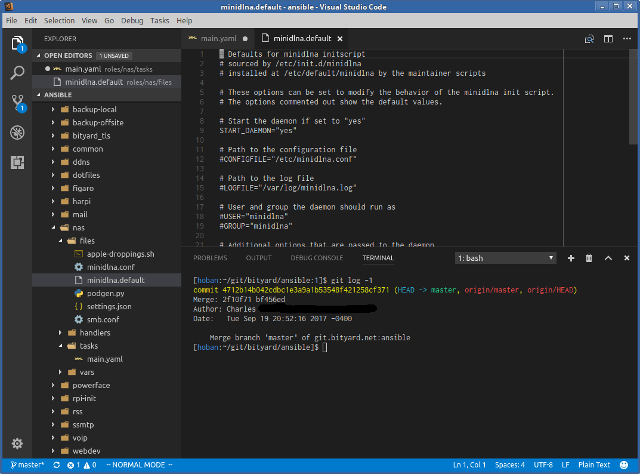 I have been using Linux both personally and professionally for basically all of my adult life and have actively avoided Windows and other Microsoft products because they represented everything that I saw as wrong with proprietary, commercial software. But I guess we're seeing a kinder, gentler Microsoft or something these days. VSCode is excellent and the fact that I'm voluntarily running an open-source Microsoft product on my Linux machine for day-to-day work is still pretty weird whenever I think about it.